Change is nay a ‘four letter word,’ but for many of us, it might as well be.

We rant, we pout, we claim that we don’t want it, won’t embrace it and vow to avoid involvement of any type. Yet we also know in a very real and logical sense that change, no matter how daunting, is often necessary and a vehicle for progress.

With upwards of three hundred members, the AATC prevails to be a small but mighty organization due much in part to its dedicated members and strong leadership willing to not only take on change but seek it in order to excel and keep up with our ever changing times.

A fantastic year which also incorporated much change, the meeting began with a unanimous vote to approve a modification in the AATC membership duration schedule, implementing a calendar year policy versus the old join-date arrangement, a change that among other benefits, will better streamline the process.

Next on the agenda were the nomination approvals of four individuals who will replace those stepping down from the AATC board of directors. As Mike Manz, Wally Hayes, Meghan O’Neil and Robert Newman were wistfully and graciously thanked for their service, Dina Shtull, Aaron Pratt, Javier Pescador and Andrew Schofield were welcomed with great enthusiasm and open arms.

Given the opportunity to address the crowd and share their motivations in joining the board, Dina, Aaron, Javier and Andrew all noted their desires to give back to an organization that has helped and inspired their own running and promote the club’s friendly, encouraging, inclusive atmosphere for runners of all ages, abilities and experience levels. Their unique perspectives and experiences will surely generate exciting times for the Club.

As the various representatives of the many facets of an extremely dynamic Club briefly recapped numerous achievements and offered a few sneak previews including activities being prepared for 2018 to celebrate the 45th Dexter-Ann Arbor Run and the 50th anniversary of the AATC, the Club’s bright future was none too clear.

Fittingly so, this year’s AATC volunteer of the year award was given to Ellen Keefe-Garner, the Club’s treasured social media guru. With nearly 1,400 and 3,000 respective followers of the AATC and Dexter-Ann Arbor Facebook pages, Keefe-Garner, a walker with deep respect and interest in running, is clearly a driving force in the overall success of the Club.

And while the running talents of AATC members are too numerous to count, the 2017 AATC male and female runner of the year awards were given to masters runners, Paul Mayer and Laurel Park who among their many achievements, dominated the Gallup Gallop and Witch’s Hat races outright, further punctuating the prospects of successful, joyful running irrelevant of age. 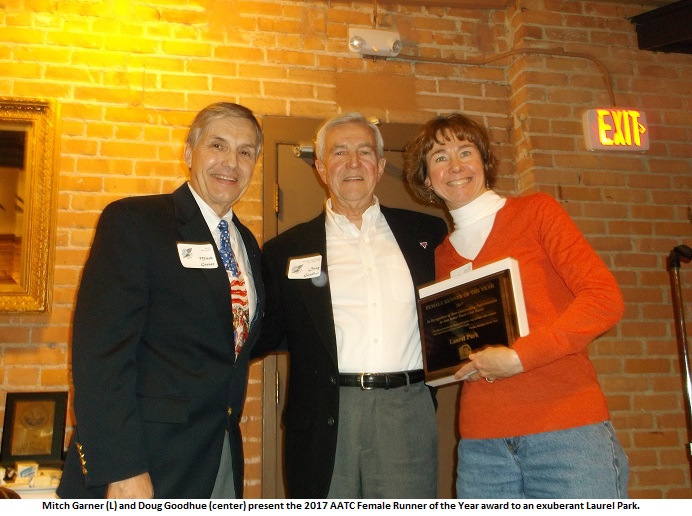 As Mitch Garner, Ann Arbor Track Club and Road Runners Club of America President, closed out the night, Mitch reflected a bit on his running career and tenure as president both of which far exceeded his expectations long ago. And while he spoke positively and enthusiastically about the future of the Club and running in and of itself, he referenced “fading into sunset” one day himself.

A brilliant, warmhearted man and talented runner to boot, Garner got that one wrong; because just as we know great things lie ahead for the future of running and the AATC Club, it is also none too obvious that the “Iron Bulldog’s” flame radiates far too bright to ever be diminished.

Please join me in thanking Garner for his many years of service and inspiration with some of the finest moments yet to come.

To stay informed of the many going ons of the Ann Arbor Track Club, please visit http://aatrackclub.org along with its corresponding links and Facebook and Twitter pages.