Sometimes history has a way of repeating itself and in the very nicest of ways.

Hosting the Invite for the second consecutive year, MRun President, Colleen Conroy shared that MRun had “over 200 athletes competing from seven different club running teams as well as alumni in town for the weekend.”

And still time was found again to organize an Open One Mile Run exclusively for AATC members.

“We look forward to having you guys!” Conroy enthused. “Our runners love seeing AATC members in action. We are inspired by your performances and dedication to the sport and look forward to being part of the running community long after we graduate college because of organizations like the Ann Arbor Track Club.”

Conroy further elaborated how appreciative they are of the longstanding partnership between MRun and the AATC and her sentiment is fully reciprocated.

“We are very proud of the partnership,” affirmed AATC President, Mitch Garner. “These are the future leaders of running clubs across the nation. It’s inspiring and impressive to see them organize such a professionally run track meet.”

No less impressive were the repeat winning performances of Frank Janssen, 5:01 and Christina Draijer, 5:59 in the Open One Mile Run.

Members of the Club now for a full year, Draijer and Janssen have enjoyed their experiences so much that they recommended friends Lucien Van Der Vlugt and Jan Plokker also join.

Appreciative of the Club’s camaraderie, inspiration and speed workout opportunities, Lucien and Jan are already reaping membership benefits; both achieved personal records in the day’s Open One Mile Run and were thrilled with the accomplishment especially so early in the season.

A beautiful blend of youth, maturity, novices and seasoned veterans alike, running has the ability to unite us in the purest and most powerful of ways, a historical achievement always worthy of repetition. 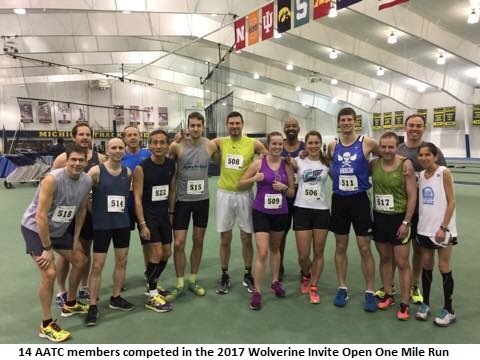