Ann Arbor Track Club member, Jen Fike, is a woman who just makes things better for everyone in her midst in so many ways.

“We focus on environmental protection for the Great Lakes states focusing much of our efforts on protecting water quality.”

Closing in on two decades of nonprofit work, Fike previously worked for the Huron River Watershed Council, the Food System Economic Partnership and in 2010, Jen was appointed by former Michigan Governor Jennifer Granholm to serve on Michigan’s Agriculture Commission.

But it goes beyond protecting the quality of our water and food, two most important resources for runners that Fike contributes to the running community and beyond.

An accomplished runner in her own right, Jen’s authentic passion, persistence and enthusiastic support encourages and enables one and all to strive and succeed.

“Jen always asks about our running and leaves us with very positive comments,” Behnam Kamrani, lifetime Club member, emphatically depicts. “I have found myself often hopeless to thank her enough. Her encouragement has been a positive drive to seek higher goals.”

“Jen suffered a stress fracture in back-to-back years during marathon training,” reflects Jon Cioffi, Fike’s husband of nearly twenty years. “She finally made it to the start of Boston after two medical deferments, nearly three years after qualifying. She knocked out another qualifier at Boston that day during perfect race conditions.” 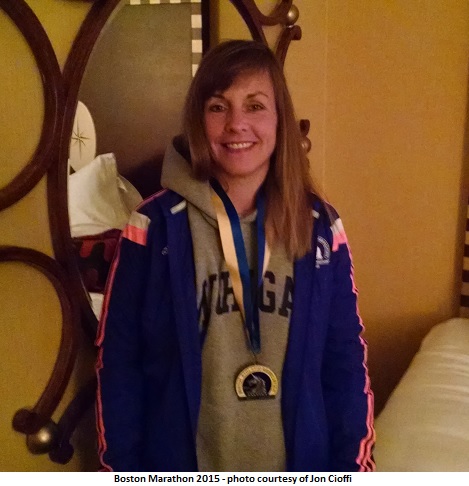 Cioffi credits Fike with his own runner status adding, “The best day I had running was doing the New York City Marathon together with Jen.”

In addition to Jen’s passion for running and the environment, she shares her love of local cuisine and cooking.

“Being in a town where there are a lot of graduate students, we often have runners who complete their studies and move away. Jen loves to host their farewell dinners, and she cooks all of the food!”

Fike maintains that running has provided her with a mental and physical toughness applicable to all aspects of life in addition to invaluable friendships made throughout the years.

But Fike might not realize the positive impact she creates doing all she adores.

A true champion seeks and creates excellence not only for themselves but for others as well. How fortunate we are to have such an outstanding Club and community member within our nucleus.