Nominated and elected by his peers, Goodhue was inducted into the USATF Long Distance Running Masters Hall of Fame as an Active Athlete, class of 2015.

“To be eligible, which Doug very much is, an Active Athlete must have ten years of performances in the database and the average age grade of their top twenty-five performances must be ninety percent or above.”

Doug’s performance history is quite staggering.

Nine number one rakings in his respective age divisions since turning sixty; twenty-seven National Championships 2007 – 2015 in races ranging in distance from one mile to half marathon; holder of five American and one World age group records.

And Goodhue continually focuses on adding to his legacy.

“I’m looking forward to chasing a whole new set of five year age divisions,” Doug allows which will happen on February 21, 2017 when Goodhue achieves the three-quarter century mark despite his boyish smile and zest for life which belie his actual years.

For 2016, our “silver haired grandpa” plans to “focus on getting back in shape” after taking a bit of time off to recover from a stress fracture injury, aiming to “have a strong year” with this last opportunity to dominate his 70 – 74 age division on local
and national playing fields.

AATC President, Mitch Garner, who could not be more proud of his treasured friend, recalls a conversation at a USATF National Championship race a few years back between elite masters runners in Goodhue’s age division.

“I heard one say to the others, ‘Well, it will be a fight for second place in our age group. Goodhue is an automatic for first.’ And Doug did finish first that day, and by a convincing margin!” 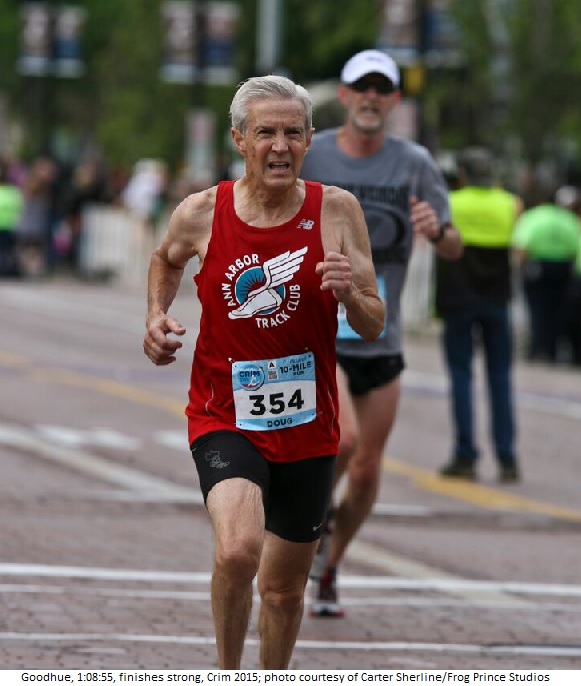 “Yet at the same time, Doug is helpful, approachable and an all-around nice guy. He is a seasoned race director, a world class athlete, a coach and a regular club member, all in one person!”

Goodhue in turn shares immense fondness and appreciation of the Club, friends and family.

“I couldn’t do it without their support.”

While there currently is no physical locale for the USATF LDR Masters Hall of Fame, Don Lein, Chair MLDR, USATF, assures, “It is in the future for Masters,” and further adds, “those selected to the Hall of Fame are outstanding athletes and contributors.”

To learn more about USATF and their existing Halls of Fame, please visit http://www.usatf.org