Their faces are smooth, their vernacular hip, but the maturity of Flanagan and Finn’s family values, incredible work ethic and focus on being role models and inspiring others in conjunction with their own goals and dreams, represent the beauty of our sport and the mission and members of the Ann Arbor Track Club. 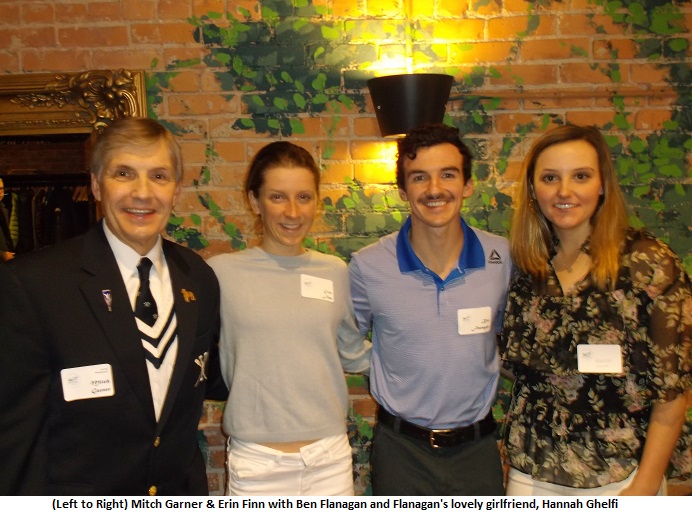 An evening rife with laughter, camaraderie, good cheer and the best eats the Original Cottage Inn had to offer, attendees were privy to honors bestowed and captivating news, if even some bittersweet in nature.

Mirroring the selflessness of Ben and Erin, our respective young guest of honor and AATC Board Fellow, Michael credited his running achievements back to the Club and the advice of his indispensable running buddy, Aaron Pratt.

“Aaron reminded me to ‘have fun doing it’,” Mester shared and went on to note, ‘There will always be someone who runs faster and slower than yourself, and we all have the capacity to help others.’

On the service side of things, Wally Hayes and Board Member, Laurel Park, were honored with the Volunteer Service Awards – both of whom display incredibly selfless dedication to the Club working arduously behind the scenes, year in and out.

And the final award of the evening was reserved for retiring Club secretary and outstanding runner, Ellen Nitz, referred to as, “The important Ellen,” by AATC ‘First Lady,’ Ellen Keefe-Garner.

“This special award which recognizes a lifetime of service achievements is not given out every year,” explained Club President, Mitch Garner. “Ellen has worked selflessly behind the scenes for many years and has never sought or wanted the limelight; but she is most deserving of it.”

And as Garner began to wrap up the evening, he revealed that while he will continue his service on the board of directors, he will step down as Club President, effective December 31, 2018.

The indelible sadness and loss felt when those we revere “take a step back” in one form or another is most natural, but we must gratefully remember that their impact is everlasting. We can revel in the notion that under their tutelage and examples set, they share the reigns with a new generation of leaders complete with fresh ideas, uncanny work ethic and contagious enthusiasm ready and willing ‘to be the rising tide that lifts all boats.’