A two loop course, competitors had the option of eating two Twinkies, one immediately after the gun start, the second, halfway through the course. Those brave and silly enough to take part had one minute per Twinkie eaten, deducted from their finish time.

Zac Williston ran fast, furious and choked down one Twinkie for the win with an adjusted finish time of 17:08 (real time 18:08); Morgan Dembrowski ran “Twinkie free” leading the women in 19:11.

A fundraiser for ALS (Lou Gehrig’s disease) research, the race was started by Tortoise and Hare co-owner, Shawn Jyawook, in memory of his friend and former employee, Jim Mong, who lost his battle against ALS in 2009.

“We started with a golf outing, but Jim was an athlete,” Jyawook smiled in memory. “He would have thought nothing funnier than a bunch of runners choking down Twinkies while trying to run!”

Eight years later under the leadership of Ann Arbor Active Against ALS, Shawn’s genius grew from thirty-some participants to what it is today.

“This race is different and silly and a reminder to take a little break once in awhile,” underscored race director, Joel Dalton, also a founding and current board member of Ann Arbor Active Against ALS.

“When you are familiar with ALS,” Dalton continued, “it is easy to remember to keep running fun, stop and smell the flowers, watch the birds, and maybe eat a Twinkie…at least after the race!”

That they did as the crowd was treated to warm Twinkies straight from the grill,

a newfound delicacy for one exuberant Ann Arbor Track Club member and two time Twinkie eater who surmised, “That made it all worth it!”

AATC President, Mitch Garner, radiated his pride in the AATC’s partnership with Ann Arbor Active Against ALS whose board members seek out whichever organization is doing the most aggressive research to donate race proceeds.

Held every year on April 1st, the ninth edition of the April Fools Day Twinkie Run will fall on the first Sunday in April 2018.

For complete results and information on ALS, please visit, http://www.activeagainstals.org/events/twinkie-run 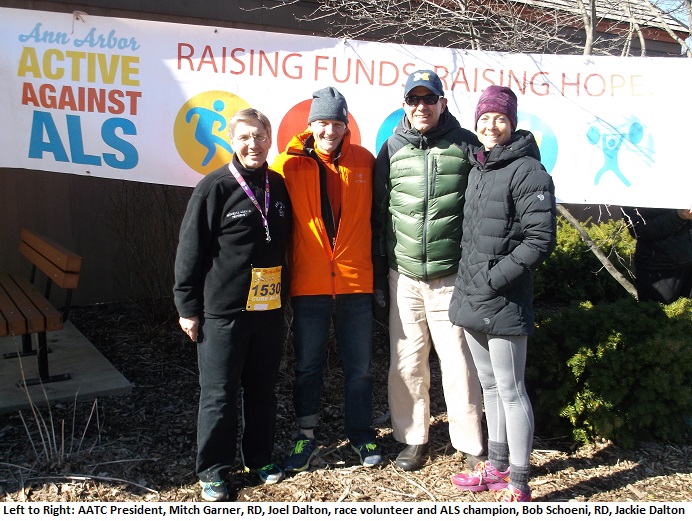