A homecoming like no other, for Michigan runners, Flint is the quintessential place to be year in and out, the final weekend of August, heat and humidity be darned.

“Crim is one of my favorite races not only because it is a favorite distance, but also because I know I will be competing against the best runners in my age division in the state of Michigan.”

Likewise, running his tenth consecutive Crim, AATC member, Aaron Pratt filled with enthusiasm explained, “Everybody is there; even if you’re not running, well, ya gotta show!”

And show they did. With more than 13,000 registered runners and walkers for the weekend of races, the AATC was well represented in solo and team competition.

“We have always had two teams, blue and white representing AATC logo colors.”

Ever so fittingly, Nitz added a third “red” team, proudly representing the newest AATC singlets and our nation pride. 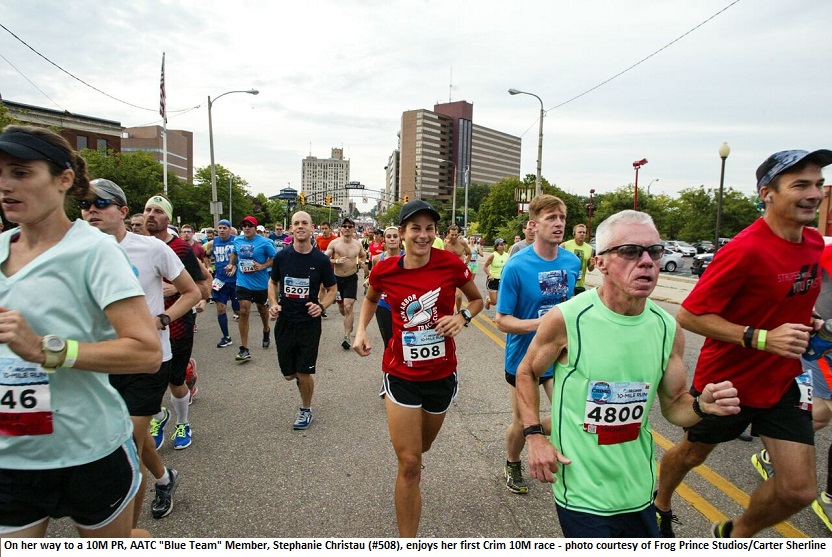 “I loved it!” Christau glowed, taking pride in her new 10 mile personal record and pumped up by the huge crowd of enthusiastic spectators. Stephanie was similarly impressed with the “after party,” directly in reference to the special accommodations given to Team Challenge members in the MLive Media Group/The Flint Journal building, mere footsteps away from race start and finish lines.

AATC members were also well represented at the prior evening’s Crim Michigan Mile USATF Championship, always a draw for many of the top masters runners in the USA.

So much talent, so much joy, pure camaraderie and opportunity abound, the AATC is Michigan running at its finest, and we encourage you to be a part.